The August edition of the Danish Water and Wastewater Association DANVA’s magazine DANSKVAND features an interesting article about new technologies for hydrogen sulfide prevention and removal in sewer networks. The article summarizes the findings from our recent VUDP funded demonstration project conducted in cooperation with the Danish water utilities Hedensted Spildevand and Vejle Spildevand, Aarhus University, DHI and Bollerup Jensen. 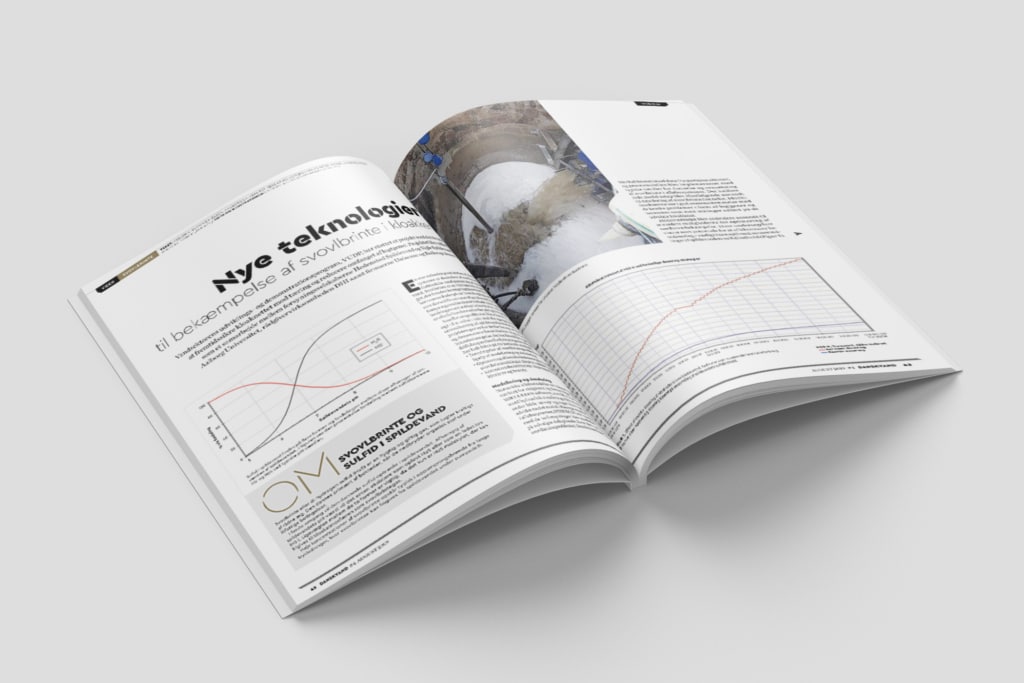 Unfortanately, the article is only available in Danish, but the publicly available project report contains a brief English summary with the same information presented in the article.

For us, the project highlights a fundamental difference in the sheer level of detail between direct, liquid phase measurements of dissolved sulfide and traditional gas phase measurements performed in the headspace near the ground-level cover. For more information about this perspective, please read our Hedensted Spildevand case study.

A major challenge in the operation of collection systems is the formation of hydrogen sulfide especially during the pumping of wastewater. Hydrogen sulfide is a malodorous and toxic gas, which in addition to strong odor nuisances can lead to corrosion damage of pipes, wells and constructions, thereby significantly reducing the lifetime and value of these assets. The utilities largely handle the hydrogen sulfide challenges by dosing chemicals in the collection systems, but it is often associated with a considerable operating cost. The hydrogen sulfide problem is expected to grow with the ongoing centralization of the wastewater treatment, and the project’s partners have therefore tried to develop and demonstrate a catalogue of future-proof hydrogen sulfide-fighting initiatives that can lead to considerable operational savings for the utilities. The project has focused on three concrete strategies:

Numerical drainage models are today important tools for consultants and utilities. DHI develops and sells the MIKE URBAN software, which can be used for hydraulic simulation of sewage systems during both dry weather and rain. In the project, the MIKE URBAN model was coupled with a module for calculating processes in drainage systems – MIKE ECO Lab. In collaboration with the two utilities, the model was tested on selected sub-basins where there were known hydrogen sulfide problems. The hydraulic model was calibrated against data from pumping stations and the process model was implemented with typical values for the formation and conversion of hydrogen sulfide into collection systems. The calibrated model setup was subsequently used to simulate hydrogen sulfide formation in the modelled systems. The model results were in good agreement with the known problems in the form of odor nuisances and corrosion, and with measurements made on the sites.

The model tool was also used to evaluate the possibilities for optimization of hydrogen sulfide control at the selected sites. These studies showed great potential for improving the efficiency of chemical dosing – especially in conjunction with sensor measurements of the waste water’s hydrogen sulfide content.

Sensor measurements directly in the wastewater

In the project, Unisense has tested a sensor for measuring dissolved hydrogen sulfide in wastewater. By measuring dissolved hydrogen sulfide, the utilities get a more complete picture of the hydrogen sulfide problem than traditional gas meters can provide. This is due to the fact that the majority of the hydrogen sulfide in collection systems is actually dissolved in the wastewater and the fact that measurements in the sewer atmosphere are difficult to implement, as they, among other things are extremely dependent on the ventilation conditions. In the project, sensors were installed at three sites at Hedensted Spilldevand, and at a site at Vejle Spildevand. The sensor measurements were validated in relation to chemical water Side 6 af 46 analysis carried out on wastewater samples, which showed good consistency. The operating experience also showed that the sensor technology has a satisfactory durability in the hard sewer environment with a lifetime of between 6 and 12 months.

Initial experiments with the control of chemical dosing based on sensor signals showed that the sensor provides a good basis for better real-time control. The experiments also clearly showed why it may be problematic to base the chemical dosing on data from traditional gas sensors. In the specific case, the extraction and filtration of the air in the sewage atmosphere meant that the local concentration often was too low for the existing gas sensor to detect any concentration, despite the fact that there were significant amounts of dissolved hydrogen sulfide in the wastewater.

In the project, a cost-effective alternative to coating with epoxy was developed and demonstrated. Prior to the project application, Bollerup Jensen A/S had investigated the possibility of corrosion protection of sewer pipes and wells of concrete by impregnation with water glass. These studies had shown very promising results, where the impregnated concrete was virtually intact after short-term exposure to strong mineral acid. Due to this, various types of water glass were developed, which were subsequently tested on a pilot scale at Aalborg University and in corroding sewer wells at the participating utilities. These studies showed that the environment in the sewers, where the concrete is exposed to sulfuric acid produced by attached microorganisms, is very aggressive and cannot be demonstrated by simple chemical tests in the laboratory.

Unlike the promising feasibility studies, even the most effective impregnations were only able to postpone the corrosion process by some months in the real systems. In other words, it did not succeed in developing an impregnation that could provide a significant lifetime extension against hydrogen-sulfide-related concrete corrosion.

The main results of the project

The project has demonstrated methods where both sensor measurements and model calculations can be used to optimize chemical dosing for hydrogen sulfide control. This allows utilities to more efficiently and sustainably handle the hydrogen sulfide problems in the sewers.