A follow-up to this story is now available. Click to read it!

A North Sea gas operator wanted to reduce running costs and minimize the environmental impact of excessive sulfide scavenging by adopting dynamic dosing. In a lack of reliable and continuous data from traditional sensor solutions, the operator installed a novel SulfiLoggerTM H2S sensor after the first-stage separator measuring just before the scavenger injection. Initial data confirmed the sensor’s ability to accurately and quickly detect sulfide variations in the gas and supported the sensor’s role as an effective input for dynamic H2S scavenger dosing.

Background
A major offshore gas operator in the North Sea wishes to reduce his substantial dosing of sulfide (H2S) scavengers in the gas before exporting it onshore. The operator’s focus is to minimize scavenger overdosing, which will not only reduce the direct cost of chemicals, but also improve environmental compliance by reducing the discharge of unspent scavenger and reaction products into the North Sea.

One of the major obstacles to reducing scavenger overdosing is the lack of continuous and reliable sulfide measurement data input to the scavenger dosing system as well as the lack of additional measurement points throughout the production system. The most common practice of measuring sulfide is test tubes, but those measurement data are slow and sporadic, and the accuracy of the readings depend on the technicians’ abilities to sample correctly. Other methods such as laser-based technologies are expensive and difficult to purchase and operate.

Purpose
In the first part of the scavenger optimization project, the gas operator wanted to confirm that the novel SulfiLoggerTM H2S sensor provided continuous and reliable measurement data of hydrogen sulfide immediately after the first-stage separator. If that could be confirmed, the operator would subsequently implement feed forward dosing control based on this data, such as PID control and/or interval-based dosing.

In the side-stream, the gas was conditioned to meet the sensor’s operation range in terms of temperature and pressure (<40°C, <10barg). This position of the sensor was chosen to confirm the feasibility of the sensor in a feed forward dosing mechanism. Alternatively, a feedback mechanism could also have been established, but in the case of the operator’s specific set-up, the feed forward dosing was the better choice. If a clear correlation was observed between the SulfiLoggerTM sensor measurement after the first-stage separator and the operator’s own control measurement of the export gas, then the necessary confirmation would be established.

The existing scavenger dosing strategy of the operator was to inject a fixed amount of scavenger into the gas stream just after the first stage separator. Therefore, it was expected that the level of magnitude of the two sensor signals would be different, but that the variations in concentrations would be identical.

Results
As we expected, the black sensor signal of the SulfiLoggerTM sensor (see figure 2) was approximately 20 ppm, and this was reduced to the red sensor signal of the export gas measurement at approximately 2 ppm. Moreover, to correct for the time it took for the gas to move from the measurement point after the separator, past the scavenger injection nozzles and all the way to the export gas sensor point, 15 minutes were subtracted from the time stamps in the export gas data set, and finally the two data sets were plotted on the same graph shown in figure 2.

Overall, the graph showed that the two data sets were heavily correlated, and this confirmed that the SulfiLoggerTM sensor measured sulfide correctly after the first-stage separator.

Moreover, two other important observations were made from the graph: 1) the response time of the SulfiLoggerTM sensor was so short that even tiny variations were measured, and 2) an attractive scavenger savings potential was identified due to the large gap between the present average at 2 ppm up to the 5 ppm limit for the export gas. The operator was convinced that the SulfiLoggerTM H2S sensor provided reliable measurements of sulfide levels in the gas directly from the first-step separator.

The next step
In the coming months, the operator will install more SulfiLoggerTM H2S sensors on the platform, and he will gradually test and introduce different scavenger dosing strategies to determine which solution results in the most dynamic and cost-effective setup.

Figure 1: Overview of the sensor’s position in the test setup 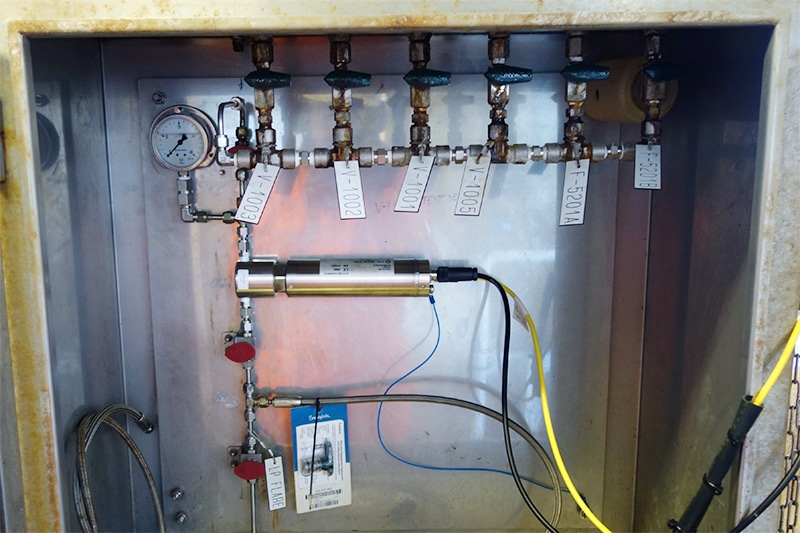